Still on the porch 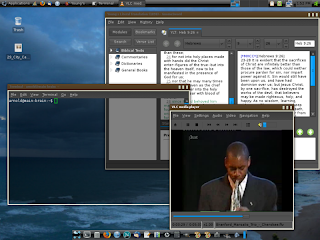 Linuxville is my virtual retreat as you can see I am running a video in VLC media player, I like jazz and here is Bradford Marsalis on soprano sax, sweet! And I have Gnome Sword Bible Guide which has many free bible versions in various languages and is very handy for study. And you can see through the Terminal, the infamous command line. The talk around town is that there is a little something for all your computing needs. I am pretty much satisfied with XFCE as a desktop, though I did play with compositing. I loaded Avant Window Manager to get an animated icon-bar like the one on Macs. It installed smoothly, looked nice but I couldn't drag and drop application icons on the bar and it kept interfering with my Xfce window settings. So, I got rid of it. Like I said, I'm happy with Xfce as it is. You can tweak it to look good and it has good solid functionality. If you want to get work done you don't want to have to hunt for stuff. I would be the first to tell you if eye candy was really useful.

Linux sometimes is the stuff of dreams and I had an idea. I can understand why so many MS struck or stuck folks won't switch to Linux. If KDE, Gnome and XFCE were to be ported over to MS Windows to be an replacement desktop window manager for MS Windows, then coupled with open source software, people could get use to using the GUIs and the programs. Could this be a path to full migration? I guess that remains to be seen, after all it is the GUI that people see. Although I wouldn't like Xfce on top of MS Windows either if it crashed. I did try a port of KDE to MS Windows but it was only to be able to run KDE applications and I don't think the desktop itself was ported. If I'm wrong, it didn't work for me. In my thought, KDE without the desktop is not KDE. But after a final analysis, it is better for you to switch cold turkey yourself than try to pry MS Windows out of your dead hands.

I've seen another version of Ubuntu, this one called OpenGEU 7.10. It is pretty fancy with artist designed looks. It has the Enlightenment 17 window manager mingled with Xfce supported by Gnome libraries. Pretty and lean on resources too is quite a combo. But the best news of all is that Ubuntu 8.04 is days away. So, all Ubuntu versions will be new all over again. The trend is to perfect the art and science of system migration. Ubuntu is making it easier to shrink MS Windows partitions, install Ubuntu, dual-boot, and transfer settings and data. There are probably YouTube videos showing you how to do it, you just have to look. But no matter the excitement over the operating system, the thing everybody wants is applications to do the stuff. So, you Linux folks need to show off how you use Linux. The GIMP has enjoyed an outstanding user support. There is also Krita, Xara Xtreme, mtPaint and others that are extremely useful and fun (do serious work). Today the net shows lots of Linux eye-candy of spinning cubes, how useful is that, so what. Can you do interesting and useful stuff with Linux applications and enrich the community? Well, there is more ahead that has yet to be realized, indeed.
Posted by rno at 2:01 PM

Email ThisBlogThis!Share to TwitterShare to FacebookShare to Pinterest
Labels: Xubuntu Linux in use