Backyards are fun but the best rummaging is done in the attic. I'm not talking about an actual attic though some I have met still have old, by computer standards, digital treasures. In the virtual attic of my experience with computers I can remember when it started. It was not that long ago and it was entirely unintentional on my part. High school had not prepared me for what came next. I won't tell you the whole story as old guys like to do but, I got a job in a library at a university. I never knew what an opportunity shelving books became for me. I got to see what everybody was reading, foolishness to highbrow to extremely technical or medical. Of course the magazines were the hardest to sort and shelve but the easiest to browse and glean. Here I discovered Byte Magazine which was the most visual of the computer hobbiest mags. I didn't understand much of what was written but it was fascinating. This was in 1971, there were personal typewriters, no personal computers in my life. The library had card catalogs, even the reference desk didn't have a computer. I would always hear of the exploits of engineering students, making black or blue boxes for illegal phone use and playing dungeons and dragons on the campus mainframe. Personal computing was becoming real and changing the world but I wasn't taking it too seriously. I read Popular Science and Popular Mechanics because they always announced the new technologies. The August 1976 issue of Popular Electronics which I also read, was pivotal for me. "Build the Cosmac Elf, a low-cost Experimenter's Microcomputer. I still have a copy of the article I downloaded later in 2000. It was before Commodore and Atari and Sinclair 1000, used a RCA 1802 CPU, which was used in space satellites. It really set the home hobbiest market on fire and my imagination. If you were a computer hobbiest in those days, you were familiar with making your own pc boards, wire wrapping and soldering, it was known as home brewing. I was tied up in family making and church and didn't have the time for that early geekness. Eventually I got a Sinclair 1000, a Z80 computer with 16k of memory and membrane keyboard. 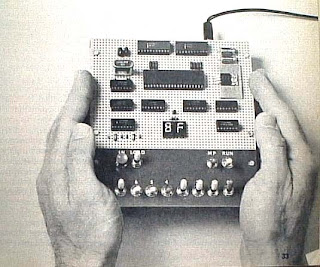 This was the Cosmac Elf, boy was this intriguing, simple machine code and filling your hands instead of a whole room of switches and relays. 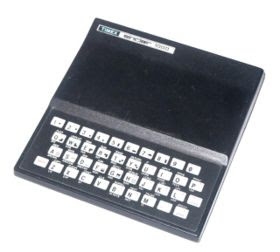 This was the Sinclair 1000, which is what I wound up with because I was not that tech savvy at the time. I am so glad for pre-built hardware and now pre-compiled software. Computers were a lot of work in the beginning. Today most users gripe if an application doesn't install properly or even if things are pre-installed, we say, "is that it?!". Being a little near the beginning of this adventure, I appreciate some of the effort that went into making all this as simple as pressing a button and clicking an icon. My first really practical computer was a Daewoo 286 that ran MS Dos. When I got it, my wife became a computer widow. The rest is history and is still unfolding in your life today. It is hard to predict how this will evolve, even older ideas are revamped and redeployed. Will we see one device that can do all communications or a number of devices that do their functions well? Will we see a resurgence of mainframes or servers that offer subscription services or an opposite push to own your own. The one thing is for certain, it is hard to realize what is going on when you are in the middle of it. Heck, there are still folks alive who fiddled with machine code, used paper tape and remember the sound of rooms of clicking relays. It wasn't that long ago.
Posted by rno at 2:37 PM