Care and feeding of a Linux user

As you all know, I am all fired up about how computer users are trained these days. It is not for computers in general but targeted for specific products. Usually it is about being a MS PC or a Mac person. Even general knowledge books assume we are using a MS PC and Macs get a cameo mention just to be inclusive. What about Linux, "Oh Linux is....... and Linux is........ It doesn't help when you get a Linux book that begins with the standard Bash command line commands. Why is it that MS PC's and Macs are point and click and Linux is still type in the commands? I have read a number of helpful Linux books and they all start off with command line training. What about the people who criticize as to whither Linux is ready for the desktop or not? They all are saying the need to use the command line makes Linux user-unfriendly. To extend the push even further, it is assumed that people interested in using Linux will grow up to be System Administrators one day or a programmer. You must be destined to use Linux on a server and manage a network and might even learn about Unix. All these perceptions prevent the popular use of Linux as a desktop operating system. Lets see, Linux on a server is highly respected but on the desktop is highly suspect even by Linux server people. Even though the Linux OS does the same things the other OS's do and the GUI on Linux does the same things that the other OS GUI's do, Linux is not ready for the desktop because it's too complex for average users because "you have to use the command line".
I have in my possession a book, "Red Hat Linux 7, Fast and Easy" by Brian Proffitt, published in 2000. This book starts off using the GUI to explore Red Hat Linux 7. It is too bad that other books I've read aren't like this one. This book is about Linux on the desktop for users to use Linux. Not for system administrators on servers, not for programmers. It does have a chapter on how to use the command line but in truth you do not need to use it unless you choose to.
So let me state the facts, you do not have to use the command line in order to use Linux on the desktop. Linux has a GUI with all the toolbars, icons and windows that other desktop operating systems have. Then, the problem with the perception of Linux not being ready for the desktop is because of people saying that Linux is for servers and programmers but not for typical users. Linux has a GUI and programs (applications) that open in windows using the keyboard or mouse, just like MS and Mac. It is the same, period. Here is a picture of my desktop. 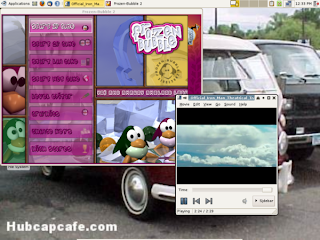 Here I have two applications open, a game and a video playing, using only my mouse to do it. Notice the toolbar at the top, the desktop icons are hidden under the open windows. Believe me, if you can use a mouse you can use Linux on the desktop the same as you can use any other desktop operating systems. I myself am a long time computer user, but not a system administrator or a programmer. I am here to assure you that as a user you are free to point and click, drag and drop, and cut and paste on any computer you jump on, including the Linux desktop.
Posted by rno at 12:41 PM

Email ThisBlogThis!Share to TwitterShare to FacebookShare to Pinterest
Labels: GUI's, Linux on the desktop, users