It is my nature to try to make things better, here in the penthouse studio. This new Ubuntu 11.10 is OK but my hardware is older. I just have to get it to where I can fiddle a little. I removed XFCE desktop because there were some background conflicts that annoyed me. Sometimes when more that one window manager is on one Linux installation, if there is not a clear shutting down of the one not being used at the time, they leak into the one you are using. XFCE has it's window manager and Gnome and Unity has theirs. It is common to share code so that redundancy can be limited. I would get some features from Gnome leaking into XFCE acting funny. So having removed XFCE and installing Gnome Classic desktop I ended some background stuff.

It figures, you want details: 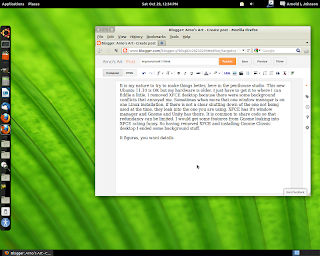 Now the dock on the side is called Cairo-dock and it does require a little compositing power and I do have it to be hidden when not in use. I have the app menu at the top and on the dock, status bar on the top and tasks and workspaces on the bottom. Believe it or not, it is faster than Unity and Gnome-shell. This eliminates two or three mouse clicks between grabbing the mouse and starting the application. Most times, one decisive mouse click allows you to keep your train of thought. In the mortal words of entrepreneur Ron Ronco, "set it and forget it!" There is nothing worst in the whole world than stopping what you are doing, doing a bunch of something else, then finishing what you started, all the while trying to remember what it was you were doing.

Why I talk all this mess? Because once you get your work space to where you want it, it is a breeze to use. In digital art you want to do things when you think about it. The OS and desktop should get out of the way, the applications should be snappy, responsive. The older Wacom tablets are fine if that is all you have, but get an optical mouse, but, but, no lose the ball mouse. I haven't had luck with wireless keyboards and mice. If that is fine with you, OK. The latest technology is not always the advantage. NASA even uses older CPU technology because they have wider circuit traces, generate less heat, very good in spaceships even if they have slower clock speeds.

I have a second old PC I can use for tutorial viewing while I am drawing. I discovered I do not multi-task well. In the past I set it up with Synergy which allows me to share a keyboard and a mouse between two or more computers. I just move the cursor arrow to the edge of one display onto the display of the next, boom, I control that one, and back, I control this one. Also on this PC I can view reference pictures from my stash or from the net. It is obvious to me also I like the tech side as much as the art side. Keeping it all simple, of course. I am just saying the older tech is cool if it still works, use it till it's dead.