I ran across a couple of interesting thought lines. The first concerns the word 'jazz' and the second is about 'art'. Jazz and it's history have not been one of glory. I think about 'The Color Purple" and "Roots" and "The Entertainer" and how jazz was portrayed in a not so proper life-style light. Minstrel shows, night clubs, bars, etc were all the venue and the fodder for gregarious displays of loose behavior. Some folks want to change the name to Black American Music or BAM for short. Because Jazz had it's start with Black folks and is fading away by means of other cultures embracing, redefining, watering down, defusing, blending and bending. Don't give me the culture/time flux and change argument. Or the other culture playing it is great appreciation argument. What happens when the forces that created and sustained the art, no longer exist or is important? It could die!

The other question is about the definition of the word 'art' in the context of culture, Black culture in particular. Most African languages didn't even have a word or concept to match what the Euro understanding of art is and has become. We have a name for everything, jazz and art are so open ended, leaves a lot to question and abuse. I did run across an Igbo word "Nka". Now the Igbo are from the West African area associated with the Slave Coast. Nka has more to do with the creation action than with the thing created and has spiritual connotations. But as with all words, especially foreign to us, it is better understood and explained by a native speaker. It is worth exploring to get the true deal.

We like to pigeonhole stuff so that we can communicate with others in the same society and have at least similar understanding. In the case of Black cultural descriptions, being defined by others and having to live with those descriptions leaves a lot to be desired. It's like when you say classical music, the Mozart name comes to mind. We here in the Euro cultured USA think that is normal. African American classical music would be Jellyroll, Ellington or Coltrane, we have to use the 'jazz' word and add from the 30's, 40's or 60's. This is on going, there will be more discussions about the negative connotations vs the accepted music institutionalized in American culture.

I do Black American art, African Diaspora art, Pan-African art, etc; because to just do art in and of itself or for itself is meaningless to me. But you, you won't know what that is until I show you. Here are a couple.

This one has to do with past and present Black folks communing with more ancient ancestors. 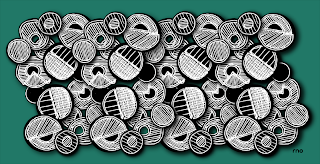 This one has to do with memory discs scattered across time and nations being gathered to display a pattern of remembrance and present awareness.

It is easier to explain them than give them a title and description. Again, no ideas were harmed by this artist while using Open Source Software and a Ubuntu Linux PC.