The Linuxville handbook - tweaking the user

I am poking fun at us, but how many of us have full intent to impose our standard upon the products we buy, especially if we don't like the looks of it and we buy it anyway?!!

Being a satisfied Ubuntu guy, more specifically a Xubuntu guy, I have heard many complain about Ubuntu Linux's brown themes. I think the humanity focus on the range of skin tones have inspired these themes. But if you are predisposed to not favor bio-bag colors you could, as most Linux distros allow you, change them. Xubuntu is more grey or gray than brown, but there are themes that move beyond that also. Me, I kind of like grey (gray too!).

When a commercial product is offered, a limited range of choices means less work for the company and the ease of no-brainer, habitual, pattern forming, I'm use to this, familiarity for you. Linux lets you tweak things until they are comfortable for you, then you can develop all the habits you want. Choice first, habitual later.

I laugh, it's like going to a gallery to buy a picture. You spend all day looking, then deciding, then someone says "do you want to frame that picture?" Oh no, frames, so many frames. It is a good thing I can download pictures I like and use them as desktop backgrounds. This makes the frame/theme thing a minor issue.

Desktop icons and refrigerator magnets have a lot in common. We were duped to believe desktop icons would organize our mess by shear handiness. A few, yes. A dozen or more and a search tool is required. I have my file manager icon on a toolbar and my files in folders, so easy to click-n-pick. I have program launchers also on a toolbar and I also have the dropdown menu selector. I can get to everything without obscuring the beautiful desktop background with icons. It is all about moving things around and neat habits and easy work flow for yourself.

I should say something about eye candy. Eye candy is cool but marginally useful. Some folks just want shadows behind windows, sort of a pseudo 3d look. But some really like swirling cubes with videos playing on each side, windows that wobble when moved and mimicking other OS desktops' toolbars, themes and colors. Is it because of envy or I got that too and "BET YOU CAN'T DO THIS", bragging rights, I don't know your motives or inspiration. The fact you can do it is enough for some and some must exploit it to the max, "IT'S SHOW-N-TELL TIME BABY, TUX RULES!!". Pick your level of visual excitement.

Hey, it's your computer, your data, nobody is going to manage it for you but you!!! My car is cool enough, I even wash it sometimes. The interior is.......well, I am not proud of having to excuse the mess. A little housekeeping and I won't hear "gee, your car rides nice". Yeah, and I'm really sorry about the mess. Fixing hardware is fun, tweaking users is difficult at times.

There is a hidden war in the user interface world that probably began with the typewriter. We came into computers via the typewriter keyboard and wheither we touch-type or hunt-n-peck (like me), the keyboard ruled until the mouse. Someone reduced it all to a few mouse buttons with the help of display graphics, of course. Now we tussle between mouse or keyboard ability. If you learned keyboard skills, you are in one camp. I am willing to bet all hunt-n-peck folks are avid mouse mashers. Keyboards are the domain of the skilled, the trained with the dexterity of a dancer, the nimbleness of finger and mind to remember what symbol and what key invokes what magic, with swift precision. Truly an art and has been an Olympic event in many schools and offices. To see it all reduced to a cursor, a picture and a mouse button is extreme madness. It is sacrilege to some and salvation to others. We even have that weird finger pad on laptops.
Well, I don't mean to take sides but........ 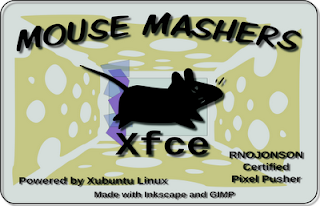