It's a voluminous room with swirling lights and digital sounds. There were displays of the first mainframe all the way to todays typical desktop PCs. And the big survey question, what's on your desk?? 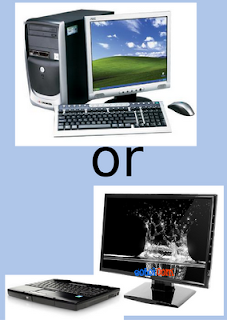 Hey, what happened to that laptop? That's SHOCKING!! It's as though somebody ripped off the LCD display and........., I just wanted you to see what I was talking about.

Oooooooh, it looks nice doesn't it? You know it does!! I gotta get me one of these!!

Those marketing people are so mesmerized by the portable laptop mystique, they can't see what a great idea this is. I want to replace my big standard desktop PC with a sleek low powered all-in-one, under the keyboard technology that already exist, a laptop without the display mounted on it. I can use any LCD display I already have, standard or wide format. This setup should be the new PC for when portability is not an issue. This would lower the cost of the PC for many folk who own displays already. What about portability? Well those who need it can get a netbook like that Asus EEE or similar, you can take it with you.

My last bit of mental exercise is what shall we call it. Macs are Macs, MS powered computers are PCs, maybe Linux powered computers should be called LICs or Linux Intelligent Computers or LPCs, Linux Powered Computer. Gotta have a moniker.
Posted by rno at 2:56 PM