puttin on the TUX

As you all know, I've been picking at the user psychology and all the subtle inside feelings and mental wrestlings of making home in Linuxville. Easy for some, extremely hard for others. In this installment I present further propaganda, a photo of the whole country of Linuxville......... 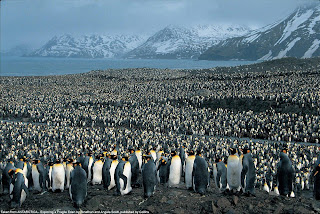 Yeah, I am in there just left of center, wearing the black and white outfit, shades and waving.

In the technology realm, quite a lot depends on the hardware and I've been hammering you all with the display-less laptop as a desktop replacement. There have been many very inventive, even innovative computer configurations in the past few years, a few are making it into the marketplace. The shift in user preference is slow and entry prices for new hardware concepts are steep. But in this tight budget economy perhaps newness just requires incremental steps instead of huge leaps of techno-faith. I give you guitars as an example......... 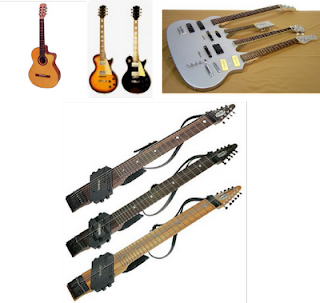 Top left we have the classical guitar, next Les Paul (today's standard), then an attempt to fulfill every guitar players dream (to play it all). On the bottom is the Chapman Stick. If you haven't heard of Emmit Chapman's Stick, go get your Google search working. Guitars go step by step and the GUI part is the same. So in computers I want something next step like, not radical and pricey. The standard case PC is being over taken by laptops, but the portability aspect is over played. Full-sized keyboard comfort yet laptop technology and oh man, that detached display is the way to go. I really don't have to carry a computer everywhere I go, or want to.

Hey! Don't force me to use car examples! OK! As much as I admire foreign cars here in America, they did not make sense until they made a mid-size car. This is because we like roominess not tight and efficient cars. We also don't all like aerodynamic shapes and so while going back and forth between truck profiles and bullet-like sports cars the cross-over hybrid van like sedan became very popular. I my self like that Dodge Caliber, not too small or too big, it looks like it has muscles and carries people without folding them first. And 30 mpg is not bad either, that's better than my present Chevy.

Speaking of creative avenues, will someone please inform the library folks that the 30+ Photoshop books in the computer section and the 30+ Photoshop books in the photography section are all about the same thing, Photoshop. And the books on computer illustration, drawing and painting are few if any. Libraries should be getting books to help folks learn stuff, not books by professionals selling glorified portfolios. GIMP, the GNU Image Manipulation Program is free and useful for any computer art/photo work and by everyone. Learning GIMP is no harder than Photoshop or any other artist software. GIMP being free makes it accessible to everyone just like library books themselves. If I had to pay to get into the library, I would save my money. Why a library would have 60+ Photoshop books and no GIMP books is madness and ignorance.

The above expression of disillusioned rage is typical among Linux fans who enjoy the comfort of holding a printed book on Linux or Open Source Software subjects. If it were not for internet info sites, we'd be out in mass, looking much like the first picture in this post.
Posted by rno at 12:02 PM