Ha, Ha, you didn't see the orange cones when you came by did you? Good, I hoped you hadn't noticed! I was sitting here musing at the latest upgrade version of Xubuntu. I had installed version 9.04 on an empty partition. It's not a big upgrade just by looking at it, so I was in no hurry to have it. This morning before I went out on a call, I got the usual "you have program upgrades available" notice, but added to that was chance to upgrade the whole Xubuntu 8.10 to 9.04. I said why not and pushed the button. An hour and 20 minutes later the files were downloaded and installed. Some of the artwork is nicer, the performance a little snappier and when the 512MB of extra memory I ordered comes we will see more improvements. Boot-up and shutdown times seems a little faster. I am more thrilled to be up to date than having extra flash.

This latest iteration of Ubuntu is called Jaunty Jackalope. Yeah, Ubuntu names!?! A Jackalope is a legendary creature the likes of Big Foot, but more of a "little foot" in this case, not as illusive as the following picture attests. If you do see one, approach with caution or you'll be the endangered species, Ha Ha! 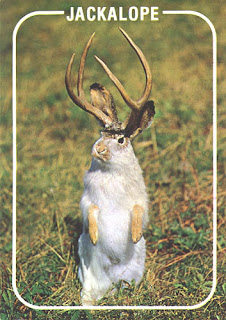 It was not a smooth a transition as I would have liked. Why? There is this thing called a boot loader (GRUB). And like all boot loaders, is wonderful if it is installed in the correct place. Then when you install a second OS, supposedly the software will recognize that you have or have not installed Grub. If Grub is there, it should say, Hey do you want me to up-date your already installed Grub config-file!?! Can I hear a "Yes, Please!!" You usually can have Grub installed in the MBR (Master Boot Record) or in a boot folder of your OS. Some OS's do not handle this well at all. In my case, Grub was installed in the MBR but when I installed a second OS, a second Grub was put in the new OS's boot folder and designated the place to boot from superseding Grub in the MBR. You just can't edit Grub number two and expect Grub number one to spring back into action. Sooooooooooo, I slid in the Xubuntu 9.04 live-CD and got into the CD session. From there I got into the Grub config file and tweaked until it worked. Another way is to invoke in the terminal or command line "sudo update-grub".

Remember when you had to manually mount drives? That was until someone wrote a script, then a little program to do the job. Now all Linux has auto-mount standard built-in. The same should be done for Grub. The Linux install software should have a Grub locator in it. Find Grub, fix it if it's broke, tweak the config according to what's installed. Grub tools should be on the CD so that if thats all that needs to be fixed, you can fix it. Install or find it, fix it, tweak it!

OR put a boot loader in the bios with a switch for single or multiple OS's. Then require every OS (MS, Linux or Mac) to have a boot file that the bios can see. We do this with bootable devices already (boot order). Wow, all my problems seems to have gone away!

Why would anyone want or need more than one Linux OS on his/her computer, you ask????
Except for curiosity, I can't answer that. Normally you shouldn't encounter this unless you insist on dual-booting. Just remember to install WIN before LIN and if you are installing LIN and LIN, opt out of installing Grub a second time if you can.

Oh and my 512 MB did come and things are snappier yet. I'll tell you in a week if things of the normal use are truly better.
Posted by rno at 2:25 PM