living to tell the tale

When you come back from heck you deserve something great to play with. Google has all sorts of apps and mostly I pass. I don't like to get used to using apps that are hosted on a server somewhere. To have software and data on my PC is what makes it personal. There is one Google app that is the coolest thing I ever saw. It is called Picasa, looks like this: 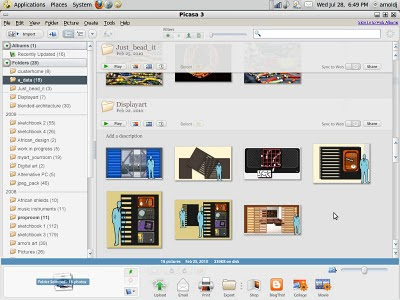 Yeah it is cool, has a little lever to size the thumbnails, which are as clear as day, and buttons that do other stuff. The absolute coolest feature is that it reads your hard drive to display all your pics. You can also grab a pic and reorder or move it. I can view my sketchbooks and reference pictures very fast. I kept saying when is a Linux version going to happen and BAM!

I have a couple of Linux picture viewers, this is the best by far.

On the art front I am working away in hard pursuit of the African art aesthetic. This started back when I was in college. I won a years scholarship to study architecture at a big name school through a work study program. When I enrolled into the regular classes, Art History was a big part, only the class was set up for art majors intending to become art researchers and curators. After months studying Greek and Roman architecture, I was disillusioned and in a rage. It was the height of the Black awareness movement and I could not find the relevance. I adjourned to the campus library, read all about African architecture, art and the counter culture green technology. I ask the question, What was the African art aesthetics that Matisse and Picasso and others "borrowed" from. And is there a Black or African style rather than just an "influence"?

Hey dude, you talking nonsense! No, wait! How many Black architects, or engineers or interior designers or industrial designers or artist can you name. I can't, I have to look them up, then I can name a couple. The internet is wonderful the way you can patch up a shoddy education with facts that pertain your origins.
But more to the point the idea that I don't have to borrow what should be my heritage and cultural imprint. I just looked.

Here is a shot of my exercise so far:

The back panel I think is wonderful using one of my drawings, the carved African door is so cool, the sofa is called Diysofa from Must Italia. My target is not the museums but the space behind and above your sofa in the African Modern style or whatever it will be called. And of course I use free and open source software for this.
Posted by rno at 7:59 PM