Attention all Nerds, America needs you!

We have relied on and trusted in the fruits of our institutionalized way of life. Our leadership in the arts and sciences has dwindled not because of lack of talent, but because we preemptively channel our talented into prescribed narrow views. Then we play up the canned culture as the holy grail of development and civilization.

Meanwhile, off the grid, in the bedrooms, basement workshops, garages and on kitchen tables, folks who diddle and dabble and tinker and toy are having great unacknowledged dreams. They see what's going on and say "I would have done it differently and done it better." Yes, this is the reason there are nerds and geeks.

Over seas folks have been using decommissioned shipping containers as building components for several years. When they started to be converted into homes here, you'd think innovative thinking would be the rule. Basically what I've seen so far is boxes, pretty and pretty ugly boxes. We have called this ultra-modern. I have also seen container homes indistinguishable from the homes that can be seen on any street. Can you folks be more boring? I'm both broke and not an architect but in the open source spirit I'm going to inject some life into this party.

Add some Quonset hut slices to your shipping containers for variety of clear span space, architectural interest, yet concise form. Here are a couple of ideas you can kick around: 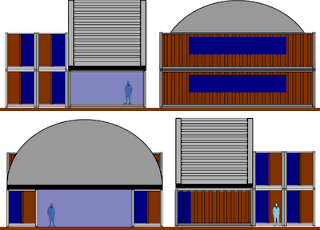 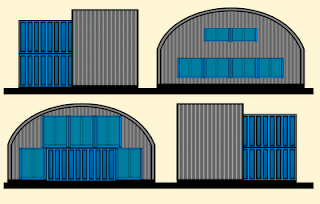 See how the quonsets and the containers compliment each other. The cool thing is that quonsets are wide open space with lots of design possibilities. Steel farm building components should be a no-brainer for us in Ohio, we just don't associate steel buildings with homes, except steel studs and garages. These are designed with a 50 x 150 city lot in mind. 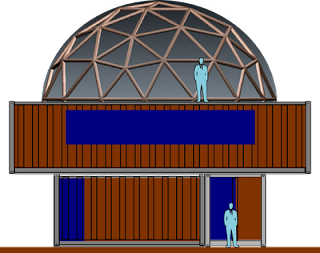 Ah yes, the geodesic is quite respectable on top of a container square, a livable attic with no wasted space. Quick, get your pencil while your mind is racing. All your schooling didn't prepare you for this moment, you had to get it from a guy who knows less than you. You think your rocking now, wait till ideas wake you up in the middle of the night!! And you can thank me later!

Many, many good ideas come to people not able to actuate them, because of lack of education, money, credentials, etc. We are so twisted that we "only" respect the properly trained and grant them honor and privilege and status, even if the only original thought they have is taking a breath.

So, among the vast urban wilderness there are scattered uncultured and uncivilized multi-talented and highly intelligent yet mis-educated people. Who because they have no credentials are deemed less. Hail to the ones who master a single avenue and darned be the jack of all trades who is obviously the master of none. We moved from a milk nation to a beer nation. The cream of milk is worthy, the froth of beer is just bubbles.

And by the way, no Microsoft products were used in making the above artwork.
Posted by rno at 5:34 PM