I know, I know, there are so many distros out there in Linuxville, why do you Ubuntu. First and foremost, there is the popular interest. People are having a lot of positive experiences with Ubuntu, this means a lot of feedback which stirs up development efforts. Then, the Ubuntu community is putting forth learning materials and documentation. Some distros though great, just don't reach out to that extent. I already mentioned about the well stocked repositories of pre-compiled software, ready to install and with new efforts for drivers and utilities from those propriety hardware vendors, it seems Ubuntu is continually improving at a good clip. It would seem any of the Ubuntu flavors would be a good pick but Ubuntu in particular is well suited for newbie folk and for this distro hopper. I have used Xubuntu and Kubuntu and I liked them with fanboy zeal, but I have to say Ubuntu itself has progressed quite well. At one time it was RED HAT Linux that was the popular learning Linux, now it's Ubuntu. Then you must see there is a whole new crop of interested users that are not maintaining servers or writing software for a living. These desktop users actually want and like using the GUI, so with Linux this is a new school. Now that Linux has made itself ready for the desktop, people are slowly coming to know about it. Here is a shot of my desktop to whet your appetite...... 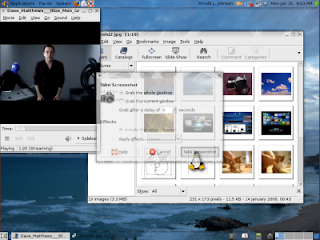 Hey, don't get too excited, this desktop is tame compared to what I've seen. Anyway I went to this Linux learning thing put on by the Lorain County Computer Users Group or LCCUG for short. This group is mainly a MS group, but interest in Linux and open source has created a spark. This is a good thing because in northeast Ohio, the Akron Linux Users Group is the only one not showing signs of giving up. There was a hint of exploring maybe a Ubuntu Linux Users Group in the future. Today we looked at installing Ubuntu on a laptop and pushed around some terminology. The training material is found on the Ubuntu web site. It is based on Ubuntu 7.10. If you are in my neck of the woods on Monday night, come and see. The LCCUG has a web site, www.lccug.com with details. To get you hooked up to Ubuntu go to www.ubuntu.com
Then as a newbie or nubi or nooby, check out www.fullcirclemagazine.org/ and download the mag, real cool.

In the real world and in northeast Ohio, things suck on many fronts. The visionary folks want to create an atmosphere where innovation and technology can flourish. Fighting for thinly stretched resources as it is, everybody thinks they can't do anything. Linux and open source allows us to freely use what we have available to us to compute and develop technical stuffs to keep on going. So we have tools we don't have to pay a lot for and it is up to us to talk about how we can use them. Don't wait for Bill or Steve to rescue us, it ain't going to happen. To bring the Silicon Valley type thing to northeast Ohio, all the technology workers need to talk to each other. The free flow of ideas and exchange of possibilities is regular faire in Linuxville. Even a little town like Bedford, Ohio has an internet cafe. If you want something in Lorain, start with talk........exit the soapbox.
Posted by rno at 9:13 PM

Email ThisBlogThis!Share to TwitterShare to FacebookShare to Pinterest
Labels: Linuxville coming to a place near you