I bet you didn't recognize me.......... I sitting here, it's sunny, near 80 degrees, in a trenchcoat, fedora and sunglasses. Folks in Linuxville know somethings going on, but they just can't say what. The joke of the western movie is that all the store fronts have nothing but cactus and brush behind them. Science fiction and spy movies on the otherhand....... The most intriguing part of any spy movie is the unassuming store front, a secret door and a whole different world behind it. It's the best part of Maxwell Smart or James Bond or Men in Black. What am I talking about, well I've been tinkering with XP as a virtual machine in Virtualbox on Ubuntu. This is what it looks like........ 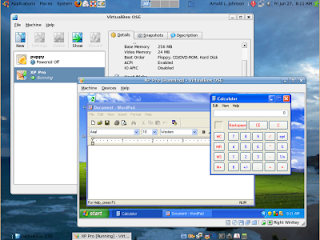 I still LOL, Windows in a window!! Anyway, after you do a normal install within the virtual machine, you can if you choose go through the pain of SP3, anti-virus (AGV) and if you plan on playing DVD's, codecs. I couldn't find a codec for XP I didn't have to pay for, so I turned to open source. I installed VLC which has been ported to run on several platforms. It comes with the needed codecs. So now I can view commercial DVD's and do internet in my secret room. There is still work to do as I've got to find ways to share data with the host system other than burning CD's or a jump drive. Virtualbox OSE or open source edition I found has some limitations with file sharing. I think I need Samba or similar, I will check it out. It would seem a small thing for an operating system, even a virtual one to view and access the whole hard drive that it is on, but no. Even a virtual Microsoft assumes it is the only one on your drive. Yellow tape and fake construction crews are also spy movie stuff. I'll be dressed in cognito as needed and I'll let you in on it, need to know bases, of course.
Posted by rno at 10:02 AM