Electric African and the Techno HUT

I have an on going story developing in my head. If you are a Black person with art and technology in your DNA, it is probably in your head also. I call it the "Electric African". He is a diaspora person, can't tell his exact origins besides the obvious. His history and his genetic path is twisted and convoluted, but in any case, he is the sum total, here in the present. His education is varied, with holes and gaps. Lucky are ones like him who master a narrow track in the schools of credentials. The broad education is promoted but not honored here.

Life has tugged at him from all directions, he meets the call yet watches his back as he sorts through mis-information and mis-direction and the hidden agenda of others. They strive to keep him ignorant, not by keeping education from him but holding him off balance by uncertainty. A broad education is useless when specific skills are required and demanded (or is it?).

He battles the world out in the open, a hopeless war. He secludes himself and while resting commits to fixing the world with the info he is sure of. The world ridicules and mocks this kind of people. Nerds and geeks and such they call them. They are not outsiders like criminals, no, they are insiders. Too far inside. Too serious they say, lighten up, party, have fun! Under their breath, that nerd was Black, is there such a thing? How did that happen? They almost say out loud, "this one is an anomaly, but not important enough to be bothered with." I would have been happy if they just said it among themselves, but they said it to my folks, my neighbors, my teachers.

No one understands how or why I do what I do. I am compelled to do it. It's not a profession because that goes in a different direction, a different end. I must stay the course, despite my wobbly footing and the uncertainty that troubles me. And why can't I just accept what others have done with their reasoning and projected outcomes, I just don't know, but I see it differently. Few will listen, few invite my view. Are there others like me? In a world of communication we are kept apart by thought.

So he keeps to himself, buys a property and collects cast-off building materials. A silo because Africans have built graineries for centuries. A quonset hut because Blacks and quick shelter became indispensable in WW2. Cargo Shipping containers because today we import everything and Blacks were imported in the past. He fashions a dwelling by blending the forms together, calls it his HUT (Habitat for the Urban Terrain). He laughs because this Techno HUT is designed by a non-architect Black diaspora man at a spot where all his understanding converges.

It was a solitary pursuit in his mind, unbeknown to him these Techno HUTs began to appear globally in every place Black diaspora have been scattered.

I chose architecture because that is the info in me, what is in you? Perhaps you have passions and skills not required by your jobs and rather than let them languish and be forgotten, you covertly dabble and what if and say one day............. 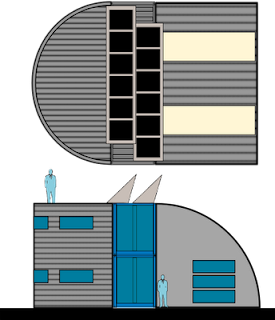