get off it and get with it

There are plenty who describe Linux with all the techie flavor and the smell of singed circuit boards to boot (that's a pun, son). I, your Linuxville guide, am not here to give the you the technosis but the play by play. Living with Linux is possible.  "Ah man, Linux ain't so great, they ain't got no good games." No, Linux has no Xbox, or PS2 or Wii or MS or Mac games, but does have lots of Linux games and how would I know, I don't play many games anyway. So, I don't say much about what I don't do much, OK?

I am more like a backyard mechanic only my passion is art and architecture. Hey, I said passion, not obsession! You try building what ever building pops into your head. Making paintings is cheap compared to buildings. The architectural idea is a way of visualizing building possibilities. If one gets the chance to build a dream house, then that is icing on the cake. My major problem is that I see so many possibilities and regard architecture as art. I usually do the reverse of good design practice by putting the form above the function. I like creating a space then defining what you can do in that space. I see no diff between a tent, cabin or warehouse loft. It is just a space to figure out how to live in it. The really only critical thing is utilities and services, the rest is open to your whims.

In my exploration of form I have fallen in love with several semi-prefab situations that have been used in my lifetime. Quonset huts, geodesic domes, grain silos (short ones) and now cargo containers (tall ones). If you use them by themselves you can only go so far, but if you can combine them, blend them, you begin to form many interesting possibilities. So I never say I am going to live in a quonset hut or any of the other forms alone. That to me would be boring and simplistic. Cargo containers are square no matter how you stack and wrap. To take the emphasis off the cube warms the form, humanizes the form so that it is more inviting. 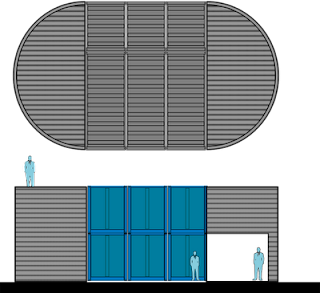 I can see a roof garden, solar arrays, glass here and there. The form itself is a stack of cargo containers and a silo split in two and put on each end. Simple and exploitable form. 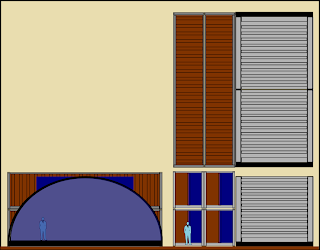 In this idea the quonset houses the open half and the containers the more private spaces. But who is to say how you live in this kind of building.

Now over a couple of blogs I have given you some good ideas to use cargo containers with other semi-prefab building forms. The results are interesting spaces and lots of design possibilities. I don't care if you use them or not. The point is that you dream and design differently. The point is satisfying spaces and wonderful forms. The point is that architecture is not just for the rich and famous or for the corporate world. We don't have to equate domestic architecture with cereal boxes or force average people to live in surreal boxes. Using the forms we already have but neglect to use, we can give everybody an upgrade.

--subject shift!!--
Hey Linux folks, you gonna let them get away wid that? I'm talking about the task bar. Yeah, I know, Mac has that animated icon bar and big icons that are actually running miniature apps and Mac OSX is the desktop to copy and emulate and borrow from. What about Vista/Win7? Oh, they only got Aero, no wait, ribbons (sic), they got ribbons.  Look again, that ribbon on the desktop is a taskbar. It's a better, more useful taskbar than what's standard in Linux, the desktop pager. In fact the Linux pager has not been upgraded since the beginning. It still switches desktops and shows a teeny, tiny miniature of the windows on that desktop. If you got composting activated, you can alt-tab and get...........look, I can put a panel on all four sides of my screen and hide/expose them with a mouse move. We have used document thumbnails for centuries in our file browsers, why the heck can't we put them in our pager? Maybe because the MS ribbon taskbar is open window oriented and the Linux pager is desktop workspace oriented. You can have many windows open on each desktop workspace, where as in MS Win, it's about managing just open windows in one workspace. Which is better is a matter of how you work with it. The puzzle is when you multi-task, what is the fastest way to your data and if running apps in different windows and different workspaces are able to interact and look good too.

So, here is Linuxville the personal PC becomes the means for an active creative life. Sometimes it ain't pretty, sometimes pretty funny but mostly pretty interesting. If I have more time and inclination, I will progress to finess of presentation and maybe even 3D. I might even make a movie out of my avatar, "oh, someone did that already!"
Posted by rno at 12:01 PM