Hey, give me a break, I'm working on it!

You want to venture into the graphics world and being a free radical, you choose Linux as your platform of choice. Despite all the clamor and acclaim Macs and MS have in graphics you proceed down the proverbial "road less traveled."

Being a graphics person requires a basic understanding of art in general. A good sense of composition, color and some drawing skills, puts you in the park. It requires impressionable visionary skills but not to the extent of a photographic memory. For now a good enough mind set is OK, you can obsess and be a perfectionist later. Now if you are wanting to be a digital graphics person add to this the patience to follow through procedures.

We'll use the Jedi metaphor to illustrate. Once you get the hardware (light saber, digital pen or mouse) and the wardrobe (full length hoodie bathrobe), you must learn to use the force. While learning the force, you get the moves, think like a Jedi thinks. Once you know, you know, it all becomes intuitive. Then you don't think, just do or not do, there is no try (don't look at me, I also am a noobie-won learner).

It is like this for everyone. Pick up a pencil and draw, that is one thing, drawing well is another. Now add color, light and shade, considering foreground and background. Even using traditional media requires procedures, with computers it is more so. Computers do not automatically draw what you want. They process instructions that an artist/programmer puts in. You may push the draw circle button, know that the draw circle program activated by you, is a program. All digital art software is a collection of programs that sit under the means of your control, a GUI or graphical user interface or typed in instructions. The GUI makes drawing easier but also awkward because you must understand what it does, how it works and go on from there. This is where the term CAD (computer aided design) comes from. The force may be strong in you but the hardware and software must also be your allies.

The popular Mac and MS PC platforms have lots of graphics applications with a long train of experienced users. If you go that way, you could go far. I recommend not being so platform dedicated, be open to what you have access to, as skills are transferable. I also keep close tabs on graphics applications that are able to run on multiple platforms (Open Source), they insure a level of freedom of movement that is well appreciated. Also note that Open Source programs are not commercial so they are not advertised or marketed by a for profit company and most likely are free. You may not be aware of them or realize that the quality and usefulness of Open Source Software is quite high.

One problem with Linux graphics is always in the number of experienced users. For instance while Blender 3D has a huge following, other very useful graphics apps have smaller communities. This results in less documentation, less tutorials, less examples and less chance to be applied in a professional capacity. It could be a great program but the developer is too deep in his work, too far down the road and/or too busy to help a noobie-won. A community of users thus has users at various stages able to both asks questions and supply answers. The community in Linux is vital to learning anything.

So here's the thing. With computers, the promise is repeatable results and tweakable input so that different results is possible. The caveat, once you learn the GUI (graphical user interface), you might be stuck in that program (Blender folks know this, so do Photoshop folks). This is OK, if this program is your tool of choice.  Just don't let familiarity mess you up, there could be better stuff waiting in the wings, but under exposed, getting bad press (from you) and just starting to have a viable and flourishing user community.

OK, lets get practical. I am looking at K3D a Linux graphics application. It is in active development and is starting to have a user community. Right now there are not that many tutorials, especially video tutorials. This is further frustrated by the many cut-n-paste internet K3D name drops by folks who are not actual users themselves. They always mention the name but repeat descriptions they found on the developer's site. Actual users promote good software to other users. Their enthusiasm and curoisity and creativity causes the same to rise up in many want-to-bi-wons. They become noobie-wons and the process goes on when they show what they can do with tutorials, finished work and bug fix suggestions, etc.

I usually read and view all the pictures first and look for tutorials that explain the interface and tools and then how to do something to start me drooling. Accomplishing something is how it's done. If you have used other graphics apps you have a leg up. I have but mostly 2D, so 3D is an eye opening experience and requires a little more umph!

Here's my screenshot to prove I have started. 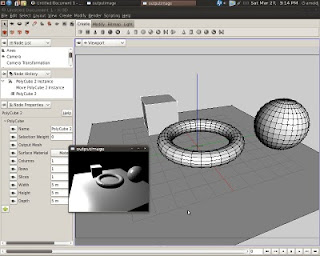 The window in the middle is a preview rendering with no settings yet. In the online docs is a file called Simple Work Flow Example. It explains how to do what I have done above only using a cylinder and tapering the top. By doing this a few times and reading the text over and noting the changes in the parameter sidebar, you get the gist of what's going on. Forget technical perfection and accuracy at first, play. Play, never lose the ability to play. Play progress and play some more. When you ask why, you are ready to learn and advance. Then comes what if, now you are starting to use the force.

OK, get K3D and play, I don't want to sense any disturbances in the force.
Posted by rno at 4:01 PM